Hi, there! How are you all doing today? I’m doing pretty good. I got a lot of work done today, and now I’m finishing up my last review (before I finish my current read of course). Sometimes I let them pile up and I feel like I’m drowning in them!

On this post I’ll be reviewing the first book I’ve read for SourceBooks from the stack they kindly sent me in the mail. (I look forward to reading and reviewing the others for you soon! Hopefully I’ll be able to keep you up to date with them in the YA realm.)

Anyway, this book is titled Don’t Get Caught, it’s authored by a debut writer named Kurt Dinan, and it is hilarious.

Here is a some info about it:

Max is nothing special – he’s Just Max. He’s not going to be valedictorian of his class, he’s not going to rally people to save the whales, he doesn’t even have many friends to speak of. He’s just trying to get through high school. When Max 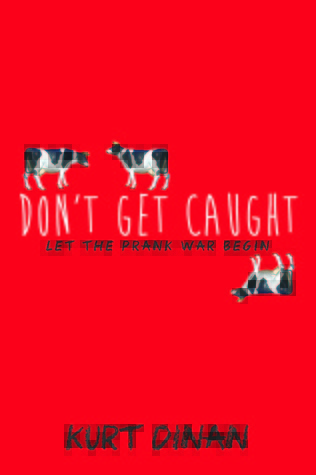 receives an invitation from the legendary Chaos Club asking him to come for their next prank he must ask – why him? All Max really knows he gleans from his favorite spy movies. Of course Rule #1: Don’t get caught. This invitation, should he choose to accept it, would change his life. He could leave Just Max in his shadow.

Except when he shows up to the designated meeting spot things go hopelessly wrong. Max and four others who received similar invitations find themselves standing on the newly graffiti-ed water tower when they’re found by the campus police.

This time Max won’t let them get away with it. Time for Rule #7: Always get payback.

I was most curious to read this one from SourceBooks, so I went with this one first. Let me tell you, I ate this one up. I couldn’t get enough of it! Max is hilarious and someone who I can really relate to (maybe not academically 🙂 ).

The back of the cover described it as a cross-over of Ocean’s Eleven and The Breakfast Club and I totally agree. The tone of the entire book was light-hearted and sweet. I also felt it had a pinch of Zombieland mixed in, too, especially with Max’s heist rules.

I liked the idea of the prank war most, I think. I personally am not much of a rebel, the closest I get is dog-earring my books and that’s not too often lately. (Sometimes I even have the gall to mark the pages!) I liked how Max felt the need to become a new person. It’s something we all face at some point – who are we now and who do we want to be? I know I feel that a lot lately being so young with my future coming at me in full force.

I think that’s another thing that made me like Max. He didn’t really know where he was going and what he was doing with his life. As a high schooler it’s hard to know what you want, everything is changing and it’s hard to keep up. I sympathized well with him.

Max’s new friends are really fun to get to know, too. I like Malone the most. Her confidence is something I admire. Her caution is something that reminded me of myself a lot.

The ending was a bit of a surprise to me. I had a bit of an idea about what would happen, but I didn’t expect it to play out the way it did. It’s the only thing I have to really criticize. I felt like it was a bit abrupt, but that doesn’t ruin the overall feeling I have about the book. The ending was a lot like the heist movies Max watches, so I’d say it was pretty fitting.

I hope my review has helped you in your search! This book will be released by SourceBooks on April 1 (also very fitting for a book about pranks!), and I hope you consider getting it! Here is a link to it if you can’t wait to pre-order it.

One thought on “Prank Wars”