Hello! I hope you’re having a good day today. It’s a brand new day and there’s so much room for new things! Do something you wouldn’t usually do. Seize the day and what not. Surprise post!! Today’s review is for The Symptoms of My Insanity by Mindy Raf. This was our March read for The Book Junkies picked by the lovely Emma. It’s my choice next month and I’m so excited, but I don’t know what I want to read yet! Okay onward with the review!

A little description of it: 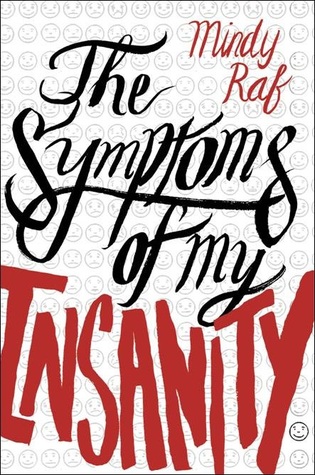 I almost raised my hand, but what would I say? “Mr. Bayer, may I please be excused? I’m not totally positive, but I think I might have cancer.” No way. Then everyone at school would know, and they would treat me differently, and I would be known as “Izzy, that poor girl who diagnosed herself with breast cancer during biology.”

But Izzy’s sense of humor can only get her so far when suddenly her best friend appears to have undergone a personality transplant, her mother’s health takes a turn for the worse, and her beautiful maybe-boyfriend is going all hot and cold. Izzy thinks she’s preparing for the worst-case scenario, but when the worst-case scenario actually hits, it’s a different story altogether—and there’s no tidy list of symptoms to help her through the insanity.

This was a cute one. Not the best, but not the worst. It was a feel-good, rom-com-y kind of book. I’m glad I read it. I always try my best to read the book club read!

Izzy is a sweet character. Her worries, though not always conventional, are some that honestly very valid. She can’t let go of illnesses because she has been so affected by them with her mother’s cancer. Her obsession with looking up symptoms and self-diagnosing reminds me of one of my sisters. (One time she used WebMD and thought she had Reyes Syndrome even though it affects people between the ages 6 and 12 and she was in her 20s.) I felt bad for her when it came to guys. Blake is such a dirty sleeze bag. She felt like she was in the wrong during their relationship when it was really him. I wish her sister Alissa would have talked to her about it or her friend Jenna.

I liked how Izzy tried so many new things. Despite her many fears, she was able to do different things and become friends with new people. One thing that did bother me though was her lack of backbone. She is a bit of a push-over and couldn’t quite find her voice to say no. I feel like a good portion of her problems would have been solved if she had done that.

Her older sister Alissa is one character I just did not like. Alissa is in college, but lives nearby and visits on weekends. She belittles Izzy’s fears and doesn’t take the time to be there for her sister the way she should be. Alissa could have guided Izzy more when it came to boys and dating. Her general attitude could use a makeover.

The book is set in Michigan in the Ann Arbor area. I liked all the references Raf makes to the campus and the places Izzy goes to. I live in Michigan and have been to the area, so it was cool to catch all the familiar names.

The end was another surprise for me. In an effort to remain spoiler-free I’m going to just leave it at that.

P. S. I could totally predict the love interest 😉

One thought on “Book Review: The Symptoms of My Insanity by Mindy Raf”