Here’s a little bit about the book: 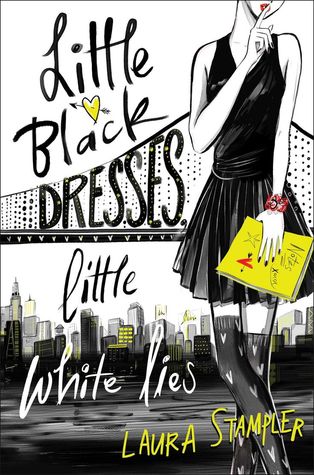 The Devil Wears Prada meets Sex and the City in a wickedly funny debut novel about a girl who lands a dream internship at a magazine in New York City. If only she hadn’t lied about being a dating expert on her resume . .

Harper Anderson has always thought she should have been born somewhere more glamorous than her sleepy Northern California suburb. After all, how many water polo matches and lame parties in Bobby McKittrick’s backyard can one girl take?

Already resigned to working at a Skinny B’s Juice Press for the summer, Harper is shocked when the ultra-prestigious teen magazine, Shift, calls to say they want her to be their teen dating blogger for the summer. All she needs to do is get her butt to New York in two days.

There’s just one teeny, tiny problem: Apart from some dance floor make-outs, Harper doesn’t have a whole lot of dating experience. So when Shift’s application asked for an “edgy” personal essay, Harper might have misappropriated her best friend’s experiences for her own. But she can just learn on the job…right? Will the house of lies Harper has built around her dream job collapse all around her, or will she be able to fake it until she makes it in the big city?

Laura Stampler is a Californian turned New Yorker. After graduating from Stanford University, she became a journalist, interning—and then worked on staff—at various newspapers and magazines. Laura has written about everything from dating to social media stars to social justice issues at Time magazine, Business Insider, Huffington Post, The Nation, The New Republic, and The Jewish Journal of Greater Los Angeles. When she isn’t writing, she’s probably looking at pug gifs on the Internet.

Today I’ll be sharing my review of the book, which I finished late Monday night. I feel like it is an exact mix of the two titles the description says it is.

What first piqued my interest was the cute-as-can-be cover this book got. I love the black and white with yellow and red accents. It’s all very sweet and aesthetically pleasing. I’m always a sucker for a pretty cover 😉

The book starts off with Harper getting her internship, and I like how it’s the most inopportune moment for her to get the confirmation call. It really sets you up for the rest of the book and how Harper is as a character. I didn’t like her at times, but I do like how her character turned out in the end. Harper struggles with an identity crisis throughout the whole book. She feels like a fraud and how does she reconcile New York Harper with Castalia Harper? I love her support system. Her parents, her best friend, and even Aunt Vee are wonderful at (trying to) being there for her. While Harper comes to her own conclusions, they’re there to help nudge her in the right direction in finding her true self.

Kristina!!!! She is (one of) my favorite girl best friends. I don’t think this world can be too much with strong women. After she finds out what Harper did to her by stealing her own personal story, I love how she stands up for herself. Kristina gives Harper the rude awakening that she needed badly. Harper’s treatment of Kristina can’t be condoned and I like that she doesn’t throw Harper the pity party that Harper wants after everything. Through everything though, she is one of Harper’s biggest fans. A fight like the one they had didn’t ruin their rock solid relationship, and I fell like it does a little too often in YA lit.

I know I was supposed to hate McKayla, Harper’s boss, but boy did I hate her. On the other hand, I was a bit bothered by the “bitchy woman boss” trope. I feel like women are too often portrayed that way in positions in power, but I know that is the character Stampler was going for, and she did it well.

The journalism aspect of the book took me by surprise. If you’ve been reading my General Updates, you’d know that I’ve just gotten back from a journalism class at Brown University. This form of journalism is one that I was not taught. It was interesting to see the virtual side of things since I wrote mostly for print. It’s interesting to see Stampler’s take on journalism and her portrayal of it due to her experience in the field. I partly enjoyed the stereotype that Stampler played in the story, but the other part of me wanted to see something different. Something not as cutthroat, but I don’t think it would have worked for the story if it was a nicer environment for Harper.

This book made me both want to get an internship at a magazine and not at the same time. I love New York City (or at least the idea of it). I was so jealous Harper got to spend nearly three months in that gorgeous metropolis. Maybe that’s just the small town girl in me, but I would love an opportunity like her. Overall I’d say it was a pretty good story. I enjoyed reading it, and I may or may not have read the epilogue before I finished because I had to know that it ended the way I wanted it to.

There is a tour-wide giveaway of two hardcover copies of this lovely book. Click this link for a Rafflecopter giveaway.  Must be 13 or older to enter. Giveaway is US only. Giveaway ends July 26 th at 11:59 PM Pacific. Book will be ordered from Amazon. Prizing courtesy of Rockstar Book Tours.

Though this is the last week of this tour, here’s the full schedule if you wanted to see what other people had to say about the book!

I hope you enjoyed this as much as I did. This was my first tour with RockStar Book Tours, and I loved it. I hope to participate in more in the future!